Stroke is the leading cause of death and disability in China. Although strategies for stroke treatment and management as well as risk factors for stroke prevention are well documented, in Chinese guidelines which is updated every year by stroke related associations such as Chinese society of Neurology and Chinese stroke society, stroke is still causing a heavy burden for Chinese community and economy.

In fact, more than 85% of stroke cases are attributed to modifiable risk factors, such as lifestyle behaviors, diabetes, hypertension, etc. With the booming of wearable sensing, IoT and machine learning applications, these risk factors can be monitored continuously and analyzed in real-time. A prediction system to stratify the risk factors with high-predictive potential can be developed by integrating these techniques.

In CENBRAIN, we study various techniques focusing around multi-modal neuroimaging systems. One combination is integrating EEG and fNIRS techniques for brain activities monitoring. The changes of received hemodynamic brain signals during various physical conditions are studied, such as performing memory task, mental arithmetic or under mental stress. Collected signals indicating the changes of neural activity and neurovascular coupling are being investigated and used to predict stroke events. In CENBRAIN, we have a 32-channel EEG recording system and an fNIRS recording system with 8 light sources and 8 light detectors, see Figure 1 below. 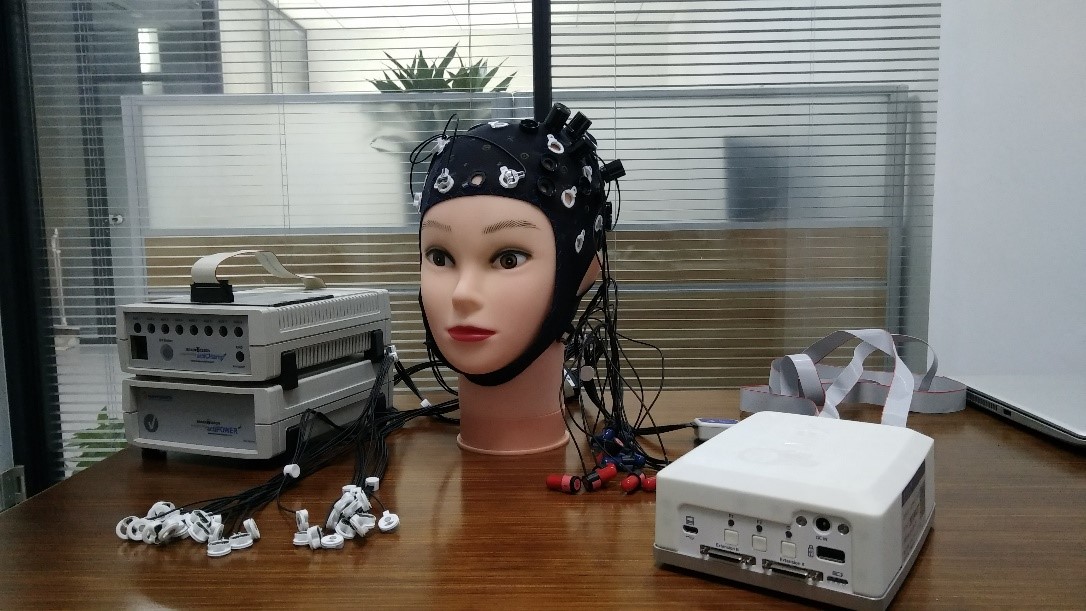 In addition to EEG-fNIRS neurorecording, photoacoustic imaging (PAI) is another technique we are investigating in CENBRAIN for the multimodal stroke prediction system.

Intended for vascular imaging based on endogenous contrast from blood hemoglobin, PAI holds great potential to describe the cerebrovascular condition for stroke prediction. PAI is an emerging powerful optical imaging modality using optical absorption contrast and ultrasound resolution. Typically, the photoacoustic (PA) effect is produced by a short laser pulse within target tissue irradiated. The pulse energy is partially absorbed by the tissue and converted into heat. Following a local transient temperature rise, the pressure rises through thermo-elastic expansion. The pressure propagates as ultrasonic waves, termed PA waves, and is detected by ultrasonic transducers.

With high contrast, high spatial and time resolution, PAI is available to acquire 2D or 3D images with time-lapse monitoring of hemodynamics and metabolism in the brain. The visual imaging can complement the EEG and fNIRS signals for stroke prediction.

At present, we are exploring the optical and ultrasonic signals transmission to achieve multi-modality for brain imaging.

Obstructive sleep apnea (OSA) is a serious and potentially life-threatening disease which afflicts millions of people in the world. It could be described by repeated episodes of airway collapse or narrowing during the sleep times with physical character. The pathogenesis of OSA is widely considered as the reduce of upper respiratory muscle activity during the sleep times. In recent studies, patients with a severe OSA experienced a significant decrease through hypoglossal nerve stimulation which inspired us to do further research.


2019 Created by Cenbrain. All Rights Reserved